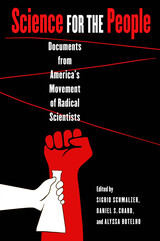 Science for the People: Documents from America's Movement of Radical Scientists
edited by Sigrid Schmalzer, Daniel Chard and Alyssa Botelho
University of Massachusetts Press
Paper: 978-1-62534-318-5
For the first time, this book compiles original documents from Science for the People, the most important radical science movement in U.S. history. Between 1969 and 1989, Science for the People mobilized American scientists, teachers, and students to practice a socially and economically just science, rather than one that served militarism and corporate profits. Through research, writing, protest, and organizing, members sought to demystify scientific knowledge and embolden "the people" to take science and technology into their own hands. The movement’s numerous publications were crucial to the formation of science and technology studies, challenging mainstream understandings of science as "neutral" and instead showing it as inherently political. Its members, some at prominent universities, became models for politically engaged science and scholarship by using their knowledge to challenge, rather than uphold, the social, political, and economic status quo. Highlighting Science for the People’s activism and intellectual interventions in a range of areas—including militarism, race, gender, medicine, agriculture, energy, and global affairs—this volume offers vital contributions to today’s debates on science, justice, democracy, sustainability, and political power.
AUTHOR BIOGRAPHY
Sigrid Schmalzer is professor of history, University of Massachusetts Amherst. Daniel S. Chard is lecturer in history, University of Massachusetts Amherst. Alyssa Botelho is an MD/PhD candidate in the history of science, Harvard University.