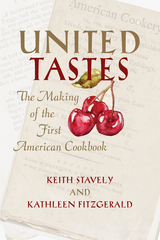 The Library of Congress has designated American Cookery (1796) by Amelia Simmons one of the eighty-eight "Books That Shaped America." Its recognition as "the first American cookbook" has attracted an enthusiastic modern audience of historians, food journalists, and general readers, yet until now American Cookery has not received the sustained scholarly attention it deserves. Keith Stavely and Kathleen Fitzgerald's United Tastes fills this gap by providing a detailed examination of the social circumstances and culinary tradition that produced this American classic.

Situating American Cookery within the post-Revolutionary effort to develop a distinct national identity, Stavely and Fitzgerald demonstrate the book's significance in cultural as well as culinary terms. Ultimately the separation between these categories dissolves as the authors show that the formation of "taste," in matters of food as well as other material expressions, was essential to building a consensus on what it was to be American. United Tastes explores multiple histories—of food, cookbooks, printing, material and literary culture, and region—to illuminate the meaning and affirm the importance of America's first cookbook.
AUTHOR BIOGRAPHY
Keith Stavely and Kathleen Fitzgerald are authors of Northern Hospitality: Cooking by the Book in New England (University of Massachusetts Press, 2011).