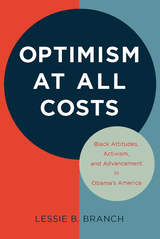 In the wake of Barack Obama's 2008 presidential victory, most Americans believed that race relations would improve. While many leaders rallied behind the first black president and the black community felt optimistic on the whole, statistics reveal a decline in black Americans' economic fortunes and a slower recovery from the recession in the years that followed.

Lessie B. Branch confronts the tension between black Americans' economic realities and the hope many felt for the future, looking at survey data alongside the rhetoric of leading black figures, including President Obama. This disparity has caused a dangerous resistance to social activism, as discourses of optimism privilege individual success over the need for collective action. Branch sees the emergence of the Black Lives Matter movement as a constructive change in this dynamic. As Americans continue to grapple with complicated questions of race and progress in classrooms, in the media, and in legislatures, this short, provocative book will inform and enrich these important discussions.
AUTHOR BIOGRAPHY
Lessie B. Branch teaches in the social sciences department at Monroe College and is a Fulbright specialist in race, ethnicity, and religion in politics.
REVIEWS
-- Margo Natalie Crawford, author of Black Post-Blackness: The Black Arts Movement and Twenty-First-Century Aesthetics
-- Vincent L. Hutchings, author of Public Opinion and Democratic Accountability
-- Darrick Hamilton, professor of economics and urban policy at The Milano School of International Affairs, Management, and Urban Policy and the Department of Economics at The New School for Social Research