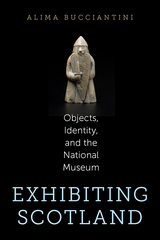 In 1707 Scotland ceased to exist as an independent country and became part of Great Britain. Yet it never lost its distinct sense of identity, history, and politics. To preserve the country's unique antiquities and natural specimens, a Scottish earl founded the Society of Antiquaries of Scotland in 1780, at the beginning of the Enlightenment's museum boom. Now numbering twelve million objects and specimens and representing everything from archaeology to applied arts and design, from social history to science and the natural world, these collections formed the foundation for what eventually became the National Museum of Scotland.

In Exhibiting Scotland, Alima Bucciantini traces how these collections have helped tell the changing stories of this country for centuries and how the museum reflects the Scots' continuing negotiation of their place within modern Britain.
AUTHOR BIOGRAPHY
Alima Bucciantini is assistant professor of history at Duquesne University.