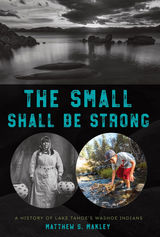 For thousands of years the Washoe people have lived in the shadows of the Sierra Nevada Mountains. At the center of their lands sits beautiful Lake Tahoe, a name derived from the Washoe word Da ow a ga.

Perhaps because the Washoe population has always been small or because it has been more peaceful than other tribal communities, its history has never been published. In The Small Shall Be Strong, Matthew S. Makley demonstrates that, in spite of this lack of scholarly attention, Washoe history is replete with broad significance. The Washoes, for example, gained culturally important lands through the 1887 Dawes Act. And during the 1990s, the tribe sought to ban climbing on one of its most sacred sites, Cave Rock, a singular instance of Native sacred concerns leading to restrictions.

The Small Shall Be Strong illustrates a history and raises a broad question: How might greater scholarly attention to the numerous lesser-studied tribes in the United States compel a rethinking of larger historical narratives?
AUTHOR BIOGRAPHY
Matthew S. Makley is professor of history at Metropolitan State University of Denver.
REVIEWS

-- Jeffrey P. Shepherd, author of We Are an Indian Nation: A History of the Hualapai People