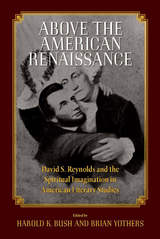 Above the American Renaissance takes David S. Reynolds's classic study Beneath the American Renaissance as a model and a provocation to consider how language and concepts broadly defined as spiritual are essential to understanding nineteenth-century American literary culture. In the 1980s, Reynolds's scholarship and methodology enlivened investigations of religious culture, and since then, for reasons that include a rising respect for interdisciplinarity and the aftershocks of the 9/11 attacks, religion in literature has become a major area of inquiry for Americanists. In essays that reconsider and contextualize Emily Dickinson, Walt Whitman, Harriet Beecher Stowe, Herman Melville, Abraham Lincoln, and others, this volume captures the vibrancy of spiritual considerations in American literary studies and points a way forward within literary and spiritual investigations.