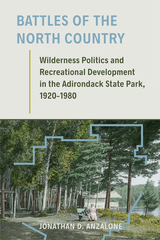 Battles of the North Country: Wilderness Politics and Recreational Development in the Adirondack State Park, 1920-1980
by Jonathan Anzalone
University of Massachusetts Press
Paper: 978-1-62534-364-2
The Adirondack region is trapped in a cycle of conflict. Nature lovers advocate for the preservation of wilderness, while sports enthusiasts demand infrastructure for recreation. Local residents seek economic opportunities, while environmentalists fight industrial or real estate growth. These clashes have played out over the course of the twentieth century and continue into the twenty-first.

Through a series of case studies, historian Jonathan D. Anzalone highlights the role of public and private interests in the region and shows how partnerships frayed and realigned in the course of several key developments: the rise of camping in the 1920s and 1930s; the 1932 Lake Placid Olympics; the construction of a highway to the top of Whiteface Mountain; the postwar rise of downhill skiing; the completion of I-87 and the resulting demand for second homes; and the 1980 Lake Placid Olympics. Battles of the North Country reveals how class, economic self-interest, state power, and a wide range of environmental concerns have shaped modern politics in the Adirondacks and beyond.
AUTHOR BIOGRAPHY
Jonathan D. Anzalone is lecturer and assistant director at the Center for News Literacy in the School of Journalism at Stony Brook University.