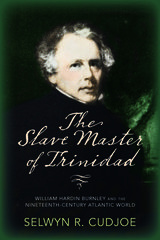 William Hardin Burnley (1780–1850) was the largest slave owner in Trinidad during the nineteenth century. Born in the United States to English parents, he settled on the island in 1802 and became one of its most influential citizens and a prominent agent of the British Empire. A central figure among elite and moneyed transnational slave owners, Burnley moved easily through the Atlantic world of the Caribbean, the United States, Great Britain, and Europe, and counted among his friends Alexis de Tocqueville, British politician Joseph Hume, and prime minister William Gladstone.

In this first full-length biography of Burnley, Selwyn R. Cudjoe chronicles the life of Trinidad's "founding father" and sketches the social and cultural milieu in which he lived. Reexamining the decades of transition from slavery to freedom through the lens of Burnley's life, The Slave Master of Trinidad demonstrates that the legacies of slavery persisted in the new post-emancipation society.
AUTHOR BIOGRAPHY
Selwyn R. Cudjoe is professor of Africana studies at Wellesley College and author of V. S. Naipaul: A Materialist Reading.
REVIEWS
-- Nicholas Draper, author of The Price of Emancipation: Slave-Ownership, Compensation, and British Society at the End of Slavery
-- Henry Louis Gates, Jr., Alphonse Fletcher University Professor, Harvard University
-- Arnold Rampersad, author of Ralph Ellison: A Biography
-- Robin Blackburn, author of The American Crucible: Slavery, Emancipation and Human Rights
-- William Julius Wilson, author of More than Just Race: Being Black and Poor in the Inner City
-- Bridget Brereton, author of A History of Modern Trinidad, 1783--1962