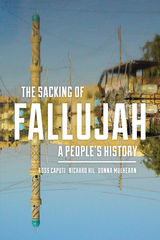 The Iraqi city of Fallujah has become an epicenter of geopolitical conflict, where foreign powers and non-state actors have repeatedly waged war in residential neighborhoods with staggering humanitarian consequences. The Sacking of Fallujah is the first comprehensive study of the three recent sieges of this city, including those by the United States in 2004 and the Iraqi-led operation to defeat ISIS in 2016.

Unlike dominant military accounts that focus on American soldiers and U.S. leaders and perpetuate the myth that the United States "liberated" the city, this book argues that Fallujah was destroyed by coalition forces, leaving public health crises, political destabilization, and mass civilian casualties in their wake. This meticulously researched account cuts through the propaganda to uncover the lived experiences of Fallujans under siege and occupation, and contextualizes these events within a broader history of U.S. policy in the Middle East. Relying on testimony from Iraqi civilians, the work of independent journalists, and documentation from human rights organizations, Ross Caputi, Richard Hil, and Donna Mulhearn place the experiences of Fallujah's residents at the center of this city's recent history.
AUTHOR BIOGRAPHY
ROSS CAPUTI is a PhD student in history at the University of Massachusetts Amherst. RICHARD HIL is adjunct professor in the School of Human Services and Social Work at Griffith University's Gold Coast Campus. DONNA MULHEARN is an activist, writer, journalist, and eyewitness to the 2004 attack on Fallujah.
REVIEWS
<P>This groundbreaking work cuts through thick veils of propaganda to reveal the experiences of the victims, with depth of research and a sensitivity that is uniquely perceptive -- and with powerful lessons for solidarity work and the struggle for 'peace with justice,' not only in the tortured land of Iraq.</P>