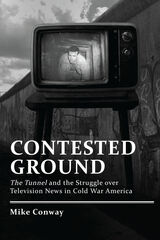 In 1962, an innovative documentary on a Berlin Wall tunnel escape brought condemnation from both sides of the Iron Curtain during one of the most volatile periods of the Cold War. The Tunnel, produced by NBC's Reuven Frank, clocked in at ninety minutes and prompted a range of strong reactions. While the television industry ultimately awarded the program three Emmys, the U.S. Department of State pressured NBC to cancel the program, and print journalists criticized the network for what they considered to be a blatant disregard of journalistic ethics.

It was not just The Tunnel's subject matter that sparked controversy, but the medium itself. The surprisingly fast ascendance of television news as the country's top choice for information threatened the self-defined supremacy of print journalism and the de facto cooperation of government officials and reporters on Cold War issues. In Contested Ground, Mike Conway argues that the production and reception of television news and documentaries during this period reveals a major upheaval in American news communications.
AUTHOR BIOGRAPHY
MIKE CONWAY is associate professor of journalism at Indiana University Bloomington.
REVIEWS
-- Matthew C. Ehrlich, author of Radio Utopia: Postwar Audio Documentary in the Public Interest
-- Bob Dotson, New York Times best-selling author and former "American Story" correspondent on NBC's Today