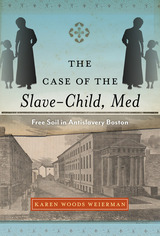 The Case of the Slave-Child, Med: Free Soil in Antislavery Boston
by Karen Woods Weierman
University of Massachusetts Press
Paper: 978-1-62534-476-2
In 1836, an enslaved six-year-old girl named Med was brought to Boston by a woman from New Orleans who claimed her as property. Learning of the girl’s arrival in the city, the Boston Female Anti-Slavery Society (BFASS) waged a legal fight to secure her freedom and affirm the free soil of Massachusetts. While Chief Justice Lemuel Shaw ruled quite narrowly in the case that enslaved people brought to Massachusetts could not be held against their will, BFASS claimed a broad victory for the abolitionist cause, and Med was released to the care of a local institution. When she died two years later, celebration quickly turned to silence, and her story was soon forgotten. As a result, Commonwealth v. Aves is little known outside of legal scholarship. In this book, Karen Woods Weierman complicates Boston’s identity as the birthplace of abolition and the cradle of liberty, and restores Med to her rightful place in antislavery history by situating her story in the context of other writings on slavery, childhood, and the law.
AUTHOR BIOGRAPHY
KAREN WOODS WEIERMAN is professor of English at Worcester State University and author of One Nation, One Blood: Interracial Marriage in American Fiction, Scandal, and Law, 1820–1870.