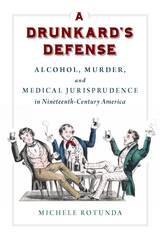 Is drunkenness a defense for murder? In the early nineteenth century, the answer was a resounding no. Intoxication was considered voluntary, and thus provided no defense. Yet as the century progressed, American courts began to extend exculpatory value to heavy drinking. The medicalization of alcohol use created new categories of mental illness which, alongside changes in the law, formed the basis for defense arguments that claimed unintended consequences and lack of criminal intent. Concurrently, advocates of prohibition cast “demon rum” and the “rum-seller” as the drunkard’s accomplices in crime, mitigating offenders’ actions. By the postbellum period, a backlash, led by medical professionals and an influential temperance movement, left the legacy of an unsettled legal standard.