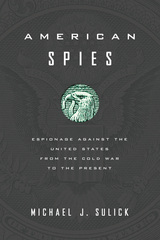 American Spies: Espionage against the United States from the Cold War to the Present
by Michael J. Sulick
Georgetown University Press, 2013
Cloth: 978-1-62616-008-8

American Spies presents the stunning histories of more than forty Americans who spied against their country during the past six decades. Michael Sulick, former head of the CIA’s clandestine service, illustrates through these stories—some familiar, others much less well known—the common threads in the spy cases and the evolution of American attitudes toward espionage since the onset of the Cold War. After highlighting the accounts of many who have spied for traditional adversaries such as Russian and Chinese intelligence services, Sulick shows how spy hunters today confront a far broader spectrum of threats not only from hostile states but also substate groups, including those conducting cyberespionage.

Sulick reveals six fundamental elements of espionage in these stories: the motivations that drove them to spy; their access and the secrets they betrayed; their tradecraft, i.e., the techniques of concealing their espionage; their exposure; their punishment; and, finally, the damage they inflicted on America’s national security.

The book is the sequel to Sulick’s popular Spying in America: Espionage from the Revolutionary War to the Dawn of the Cold War. Together they serve as a basic introduction to understanding America’s vulnerability to espionage, which has oscillated between peacetime complacency and wartime vigilance, and continues to be shaped by the inherent conflict between our nation’s security needs and our commitment to the preservation of civil liberties.

Michael J. Sulick is a retired intelligence operations officer who was director of the CIA’s National Clandestine Service (2007–10), chief of CIA counterintelligence (2002–4), and chief of the Central Eurasia Division (1999–2002), among other assignments during his twenty-eight-year career. He holds a PhD in comparative literature from the City University of New York. He is the author of Spying in America: Espionage from the Revolutionary War to the Dawn of the Cold War.