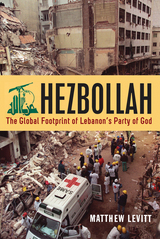 Hezbollah: The Global Footprint of Lebanon's Party of God is the first thorough examination of Hezbollah’s covert activities beyond Lebanon’s borders, including its financial and logistical support networks and its criminal and terrorist operations worldwide.

Hezbollah—Lebanon’s "Party of God"—is a multifaceted organization: It is a powerful political party in Lebanon, a Shia Islam religious and social movement, Lebanon’s largest militia, a close ally of Iran, and a terrorist organization. Drawing on a wide range of sources, including recently declassified government documents, court records, and personal interviews with intelligence and law enforcement officials around the world, Matthew Levitt examines Hezbollah’s beginnings, its first violent forays in Lebanon, and then its terrorist activities and criminal enterprises abroad in Europe, the Middle East, South America, Southeast Asia, Africa, and finally in North America. Levitt also describes Hezbollah’s unit dedicated to supporting Palestinian militant groups and Hezbollah’s involvement in training and supporting insurgents who fought US troops in post-Saddam Iraq. The book concludes with a look at Hezbollah’s integral, ongoing role in Iran’s shadow war with Israel and the West, including plots targeting civilians around the world.

Levitt shows convincingly that Hezbollah’s willingness to use violence at home and abroad, its global reach, and its proxy-patron relationship with the Iranian regime should be of serious concern. Hezbollah is an important book for scholars, policymakers, students, and the general public interested in international security, terrorism, international criminal organizations, and Middle East studies.

Matthew Levitt is the Fromer-Wexler fellow and director of The Washington Institute for Near East Policy's Stein Program on Counterterrorism and Intelligence. Previously, Levitt served as the deputy assistant secretary for intelligence and analysis at the US Department of the Treasury, as an FBI counterterrorism analyst, and as an adviser on counterterrorism to the US State Department. He is the author of Hamas: Politics, Charity, and Terrorism in the Service of Jihad.


-- Ambassador Dennis Ross, counselor at the Washington Institute; former special assistant to President Obama and senior director for the Central Region at the National Security Council

1. The Party of God Is Born

2. Branching Out: Targeting Westerners in Lebanon and Beyond

5. A Near Miss in Bangkok

6. Beirut to the Blue Ridge: Hezbollah Comes to North America

9. Finance and Logistics in Africa