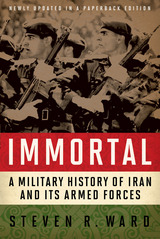 Immortal is the only single-volume English-language survey of Iran’s military history. CIA analyst Steven R. Ward shows that Iran’s soldiers, from the famed “Immortals” of ancient Persia to today’s Revolutionary Guard, have demonstrated through the centuries that they should not be underestimated. This history also provides background on the nationalist, tribal, and religious heritages of the country to help readers better understand Iran and its security outlook.

Immortal begins with the founding of ancient Persia’s empire under Cyrus the Great and continues through the Iran-Iraq War (1980–1988) and up to the present. Drawing on a wide range of sources including declassified documents, the author gives primary focus to the modern era to relate the build-up of the military under the last Shah, its collapse during the Islamic revolution, its fortunes in the Iran-Iraq War, and its rise from the ashes to help Iran become once again a major regional military power. He shows that, despite command and supply problems, Iranian soldiers demonstrate high levels of bravery and perseverance and have enjoyed surprising tactical successes even when victory has been elusive. These qualities and the Iranians’ ability to impose high costs on their enemies by exploiting Iran’s imposing geography bear careful consideration today by potential opponents.

Steven R. Ward is a senior CIA intelligence analyst who specializes in Iran and the Middle East. He was the CIA Visiting Professor to the US Naval Academy from 2010 to 2012, and he previously served as the deputy national intelligence officer for the Near East on the National Intelligence Council and on the staff of the National Security Council. He is a graduate of the US Military Academy at West Point and a retired US Army Reserve lieutenant colonel.


-- Kenneth M. Pollack, author of The Persian Puzzle: The Conflict Between Iran and America