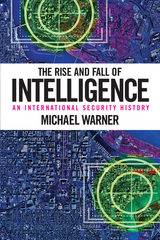 This sweeping history of the development of professional, institutionalized intelligence examines the implications of the fall of the state monopoly on espionage today and beyond.

During the Cold War, only the alliances clustered around the two superpowers maintained viable intelligence endeavors, whereas a century ago, many states could aspire to be competitive at these dark arts. Today, larger states have lost their monopoly on intelligence skills and capabilities as technological and sociopolitical changes have made it possible for private organizations and even individuals to unearth secrets and influence global events.

Historian Michael Warner addresses the birth of professional intelligence in Europe at the beginning of the twentieth century and the subsequent rise of US intelligence during the Cold War. He brings this history up to the present day as intelligence agencies used the struggle against terrorism and the digital revolution to improve capabilities in the 2000s. Throughout, the book examines how states and other entities use intelligence to create, exploit, and protect secret advantages against others, and emphasizes how technological advancement and ideological competition drive intelligence, improving its techniques and creating a need for intelligence and counterintelligence activities to serve and protect policymakers and commanders.

1. From Ancient to Modern2. A Technological Revolution 3. As Good as It Gets4. Cold War I: Technology 5. Cold War II: Ideology6. The Liberal Triumph? 7. The Shadow War

Conclusion: Intelligence All around Us