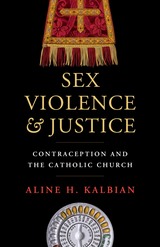 In 1968, Pope Paul VI published Humanae vitae, the encyclical that reaffirmed the Catholic Church’s continued opposition to the use of any form of artificial contraception. In Sex, Violence, and Justice: Contraception and the Catholic Church, Aline Kalbian outlines the Church’s position against artificial contraception as principally rooted in three biblical commandments. In addition, Kalbian shows how discourses about sexuality, both in the Church and in culture, are often tied to discourses of violence, harm and social injustice. These ties reveal that sexual ethics is never just about sex; it is about the vulnerability of the human body and the challenges humans face in trying to maintain just and loving relationships.

As Kalbian explores and contrasts the Catholic Church’s stance toward condoms and HIV/AIDS, emergency contraception in cases of rape, and contraception and population control, she underscores how contraception is not just a private decision, but a deeply social, cultural, and political one, with profound global implications. Kalbian concludes that even the most tradition-bound communities rely on justificatory schemes that are fluid and diverse. Taking this diversity seriously helps us to understand how religious traditions change and develop.

Sex, Violence, and Justice will be of interest to students and scholars of Catholic moral theology, sexual ethics, religion and society, gender and religion, as well as to specialists and practitioners in public health.

Aline H. Kalbian is associate professor of religion at Florida State University. She is the author of Sexing the Church: Gender, Power, and Ethics in Contemporary Catholicism.


-- Cathleen Kaveny, John P. Murphy Foundation Professor of Law and professor of theology at the University of Notre Dame