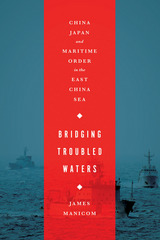 Sino-Japanese relations have been repeatedly strained by the territorial dispute over a group of small islands, known as the Senkaku islands in Japan and the Diaoyu islands in China. The rich fishing grounds, key shipping lanes, and perhaps especially, potentially rich oil deposits around the islands exacerbate this dispute in a confluence of resource pressures, growing nationalism, and rising military spending in the region.

Bridging Troubled Waters reminds us that the tensions over the Senkaku/Diaoyu islands are only a part of a long history of both conflict and cooperation in maritime relations between Japan and China. James Manicom examines the cooperative history between China and Japan at sea and explains the conditions under which two rivals can manage disputes over issues such as territory, often correlated with war.

China and Japan appear incapable of putting history behind them, are poised on the brink of a strategic rivalry, and seem at risk of falling into an unintentional war over disputed maritime claims. Bridging Troubled Waters challenges this view by offering a case-by-case analysis of how China and Japan have managed maritime tensions since the dispute erupted in 1970. The author advances an approach that offers a trade-off between the most important stakes in the disputed maritime area with a view to establishing a stable maritime order in the East China Sea. The book will be of interest to policymakers, academics, and regional specialists in Asia, security studies, and international conflict and cooperation.

James Manicom is a research fellow in Global Security at the Centre for International Governance Innovation in Waterloo, Canada. He has held fellowships with the Social Sciences and Humanities Research Council of Canada and the Japan Foundation.

1. Cooperation and the Value of Maritime Space2. The Collapse of Cooperation over the Senkaku/Diaoyu Islands3. Cooperation on Fisheries, 1997--20004. Cooperation on Marine Research Activities, 2000--20015. Resource Development in the East China Sea, 2005-20086. Managing Two Maritime Powers