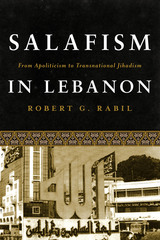 Salafism, comprised of fundamentalist Islamic movements whose adherents consider themselves the only “saved” sect of Islam, has been little studied, remains shrouded in misconceptions, and has provoked new interest as Salafists have recently staked a claim to power in some Arab states while spearheading battles against “infidel” Arab regimes during recent rebellions in the Arab world. Robert G. Rabil examines the emergence and development of Salafism into a prominent religious movement in Lebanon, including the ideological and sociopolitical foundation that led to the three different schools of Salafism in Lebanon: quietist Salafists, Haraki (active) Salafists; and Salafi Jihadists.

Emphasizing their manhaj (methodology) toward politics, the author surveys Salafists’ ideological transformation from opponents to supporters of political engagement. Their antagonism to Hezbollah, which they denounce as the party of Satan, has risen exponentially following the party’s seizure of Beirut in 2008 and support of the tyrannical Syrian regime. Salafism in Lebanon also demonstrates how activists and jihadi Salafists, in response to the political weakness of Sunni leadership, have threatened regional and international security by endorsing violence and jihad.

Drawing on field research trips, personal interviews, and Arabic primary sources, the book explores the relationship between the ideologies of the various schools of Salafism and their praxis in relation to Lebanese politics. The book should interest students and scholars of Islamic movements, international affairs, politics and religion, and radical groups and terrorism.

Robert G. Rabil is professor, Department of Political Science, Florida Atlantic University. He is the author of Religion, National Identity, and Confessional Politics in Lebanon: The Challenge of Islamism; Syria, the United States, and the War on Terror in the Middle East; and Embattled Neighbors: Syria, Israel, and Lebanon.