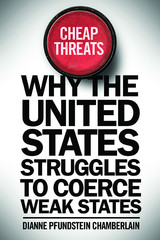 Why do weak states resist threats of force from the United States, especially when history shows that this superpower carries out its ultimatums? Cheap Threats upends conventional notions of power politics and challenges assumptions about the use of compellent military threats in international politics.

Drawing on an original dataset of US compellence from 1945 to 2007 and four in-depth case studies—the Cuban Missile Crisis, the 2011 confrontation with Libya, and the 1991 and 2003 showdowns with Iraq—Dianne Pfundstein Chamberlain finds that US compellent threats often fail because threatening and using force became comparatively “cheap” for the United States after the Cold War. Becoming the world’s only superpower and adopting a new light-footprint model of war, which relied heavily on airpower and now drones, have reduced the political, economic, and human costs that US policymakers face when they go to war. Paradoxically, this lower-cost model of war has cheapened US threats and fails to signal to opponents that the United States is resolved to bear the high costs of a protracted conflict. The result: small states gamble, often unwisely, that the United States will move on to a new target before achieving its goals.

Cheap Threats resets the bar for scholars and planners grappling with questions of state resolve, hegemonic stability, effective coercion, and other issues pertinent in this new era of US warfighting and diplomacy.

Dianne Pfundstein Chamberlain is a research fellow at the Arnold A. Saltzman Institute of War and Peace Studies at Columbia University.