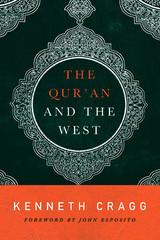 Kenneth Cragg (1913–2012) was one of the West's most gifted interpreters of Islam. In this deeply insightful, classic work of Qur’anic studies, he argues that the West must put aside a "spiritual imperialism" that draws on Western prescripts alien to Muslims and "learn to come within" Islam. Only then can a conversation begin that can relieve the misunderstandings and suspicion that has grown between Islam and the West in the years since 9/11.

Cragg’s close and thoughtful readings are as timely and relevant now as they were when The Qur'an and the West was originally published. With skill and nuance, he illuminates the difficulty that ensues through the Scripture's contradictory teachings on Islam's manifestation in the world—teachings that have brought about a crisis for modern Muslims living in both the West and the westernizing worlds, where a Muslim's obligation to Islamicize is met with anxiety and distrust.

The Qur'an and the West offers a means of study that reaches for a deeper knowledge of the Qur'an, engendering a new understanding of its holy teachings and opening a means for a fruitful discourse.

Anglican Bishop Kenneth Cragg (1913-2012) was one of the world's foremost scholars of Islamic and Christian theology. His books on the Qur'an and Arab Christianity, including The Event of the Qur'an, The Tragic in Islam, and The Call of the Minaret became classics in their field. Cragg served in academic and ecclesiastical posts in Jerusalem, Beirut, Cairo, Nigeria, and the United States in addition to serving as the Warden of St. Augustine College in Canterbury. He was the author of thirty-five books.

John L. Esposito is University Professor and Professor of Religion and International Affairs and of Islamic Studies at Georgetown University. He is also founding Director of the Prince Alwaleed Bin Talal Center for Muslim-Christian Understanding in the Walsh School of Foreign Service.