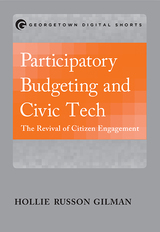 In a time when citizens are deeply dissatisfied with the basic institutions and elected officials that govern them, the participatory budgeting movement empowers citizens to get results for pressing community needs. It creates a transparent process where citizens can propose projects through traditional community meetings or use civic technologies to provide input online, work with elected officials to craft budget proposals, and vote on where and how to spend public funds. Unlike other forms of civic engagement, participatory budgeting involves spending real public money on the priorities that the community identifies.

Georgetown Digital Shorts—longer than an article, shorter than a book—deliver timely works of peer-reviewed scholarship for a fast-paced world. They present new ideas and original content that are easily digestible for students, scholars, and general readers.