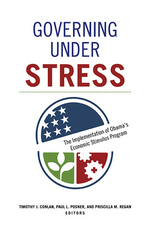 The underappreciated but surprisingly successful implementation of the American Recovery and Reinvestment Act (ARRA) helped rescue the economy during the Great Recession and represented one of the most important achievements of the Obama presidency. It tested all levels of government with urgent time frames and extensive accountability requirements. While ARRA passed most tests with comparatively little mismanagement or fraud, negative public and media perceptions of the initiative deprived the president of political credit.

Drawing on more than two hundred interviews and nationwide field research, Governing under Stress examines a range of ARRA stimulus programs to analyze the fraught politics, complex implementation, and impact of the legislation. Essays from public administration scholars use ARRA to study how to implement large federal programs in our modern era of indirect, networked governance. Throughout, the contributors present potent insights into the most pressing challenges facing public policy and management, and they uncover important lessons about policy instruments and networks, the effects of transparency and accountability, and the successes and failures of different types of government intervention.

Paul L. Posner is the director of the Graduate Public Administration Program, head of the Centers on the Public Service at George Mason University, and author of The Politics of Unfunded Mandates.

Priscilla M. Regan is a professor in the School of Policy, Government, and International Affairs at George Mason University.


-- Publius: The Journal of Federalism