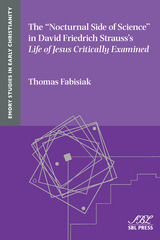 David Friedrich Strauss's Life of Jesus Critically Examined is known as a monumental contribution to the critical, scientific study of religion and Christian origins. It was widely read and influenced literary and historical research on the Bible as well as critical philosophy between Hegel and Nietzsche. Less well-known are Strauss's writings from the same period on "the nocturnal side of nature," paranormal phenomena such as demon possession, animal magnetism, and the ghost-seeing of Frederike Hauffe, the famous "Seeress of Prevorst."