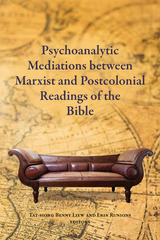 The first sustained conversation between Marxism, postcolonialism, and psychoanalysis in biblical studies

This volume pursues critical readings of the Bible that put psychoanalysis into conversation with Marxist and postcolonial criticism. In these essays psychoanalysis provides a way to mediate between Marxism's materialist groundings and postcolonialism's resistance against empire. The essays in the volume illuminate the way empire has shaped the biblical text by looking at the biblical texts' silences, ruptures, oversights, over-emphases, and inexplicable elements. These details are read as symptoms of a set of oppressive material relations that shaped and continue to haunt the text in the ascendancy of the text in the name of the West.

Tat-siong Benny Liew is Class of 1956 Professor in New Testament Studies at the College of the Holy Cross (Worcester, MA). He is the author of Politics of Parousia (Brill). He is the editor of They Were All Together in One Place? (Society of Biblical Literature) and the current Executive Editor of the journal, Biblical Interpretation.

Erin Runions is Associate Professor in the Department of Religious Studies at Pomona College. Her most recent book is The Babylon Complex: Theopolitical Fantasies of War, Sex and Sovereignty (Fordham). She is also author of How Hysterical: Identification and Resistance in the Bible and Film (Palgrave).