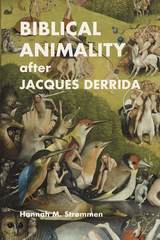 According to Genesis, humans are made in God's image but animals are not. Hannah M. Strømmen challenges this view by critiquing the boundary between humans and animals in the Bible through the work of philosopher Jacques Derrida. Building on Derrida's The Animal That Therefore I Am, Strømmen brings to light significant moments where the lines between the divine, human, and animal are ambiguous in a rich range of biblical texts, from Noah as the first carnivorous man in Genesis 9 to Revelation's beasts.

Hannah Strømmen is Senior Lecturer in Biblical Studies at the University of Chichester, UK. Working primarily in the field of reception history and critical theory, she has published on the role of the Bible in literature, the politics of the far right, and animal studies. She recently edited a special issue in Literature and Theology on animals in literature and religion.