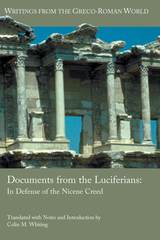 This volume includes English translations of several documents concerning the Luciferians, a group of fourth-century Christians whose name derives from the bishop Lucifer of Cagliari. Documents include a confession of faith written for Emperor Theodosius I and a theological treatise written for his wife by Luciferian clergyman Faustinus, the first English translation of a Luciferian petition to Theodosius that focuses on the persecution the community has suffered, Theodosius’s imperial law in response to the Luciferians, two letters composed by Luciferians that purport to represent correspondence from the bishop Athanasius of Alexandria to Lucifer, and the priest Jerome’s Dialogus adversus Luciferianos. These texts highlight connections between developments in Christian theology and local Christian communities in the course of the fourth century.

Colin Whiting is Senior Project Editor in the Publications Office of the American School of Classical Studies at Athens. He is the author of the article “Jerome’s De viris illustribus and New Genres for Christian Disputation in Late Antiquity,” published in Shifting Genres in Late Antiquity (2015).