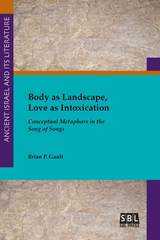 
One of the chief difficulties in interpreting the Song's lyrics is the unusual imagery used to depict the lovers' bodies. Why is the maiden's hair compared to a flock of goats (4:1), the man’s cheeks likened to garden beds of spice (5:13), and the eyes of both lovers described as doves (4:1; 5:12)? While scholars speculate on the significance of these images, a systematic inquiry into the Song's body metaphors is curiously absent. Based on insights from cognitive linguistics, this study incorporates biblical and comparative data to uncover the meaning of these metaphors surveying literature in the eastern Mediterranean (and beyond) that shares a similar form (poetry) and theme (love). Gault presents an interpretation of the Song's body imagery that sheds light on the perception of beauty in Israel and its relationship to surrounding cultures.