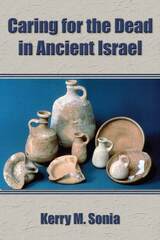 In Caring for the Dead in Ancient Israel, Kerry M. Sonia examines the commemoration and care for the dead in ancient Israel against the broader cultural backdrop of West Asia. This cult of dead kin, often referred to as ancestor cult, comprised a range of ritual practices in which the living provided food and drink offerings, constructed commemorative monuments, invoked the names of the dead, and protected their remains. This ritual care negotiated the ongoing relationships between the living and the dead and, in so doing, helped construct social, political, and religious landscapes in relationship to the past. Sonia explores the nature of this cult of dead kin in ancient Israel, focusing on its role within the family and household as well as its relationship to Israel’s national deity and the Jerusalem temple.

Kerry M. Sonia is Visiting Assistant Professor in the Department of Religious Studies at Colby College. She specializes in the Hebrew Bible and Israelite religion, and her work seeks to situate the religious ideologies and practices in the biblical text in their ancient Near Eastern context.