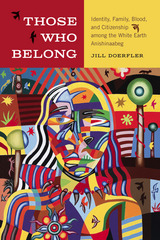 Despite the central role blood quantum played in political formations of American Indian identity in the late nineteenth and twentieth centuries, there are few studies that explore how tribal nations have contended with this transformation of tribal citizenship. Those Who Belong explores how White Earth Anishinaabeg understood identity and blood quantum in the early twentieth century, how it was employed and manipulated by the U.S. government, how it came to be the sole requirement for tribal citizenship in 1961, and how a contemporary effort for constitutional reform sought a return to citizenship criteria rooted in Anishinaabe kinship, replacing the blood quantum criteria with lineal descent. Those Who Belong illustrates the ways in which Anishinaabeg of White Earth negotiated multifaceted identities, both before and after the introduction of blood quantum as a marker of identity and as the sole requirement for tribal citizenship. Doerfler’s research reveals that Anishinaabe leaders resisted blood quantum as a tribal citizenship requirement for decades before acquiescing to federal pressure. Constitutional reform efforts in the twenty-first century brought new life to this longstanding debate and led to the adoption of a new constitution, which requires lineal descent for citizenship.
AUTHOR BIOGRAPHY
Jill Doerfler (White Earth Anishinaabe) is Associate Professor and Department Head of American Indian Studies at the University of Minnesota–Duluth.
TABLE OF CONTENTS
Contents
Preface
Acknowledgments
Introduction
Chapter 1. No, No There Was No Mixed-Bloods: Mapping Anishinaabe Conceptions of Identity
Chapter 2. Consider the Relationship: Citizenship Regulations of the Minnesota Chippewa Tribe
Chapter 3. It is Time to Take Our Own Leadership: The Constitution of the White Earth Nation
Conclusion
Appendix 1. Revised Constitution and Bylaws of the Minnesota Chippewa Tribe, Minnesota
Appendix 2. The Constitution of the White Earth Nation
Notes
Bibliography
Index
REQUEST ACCESSIBLE FILE