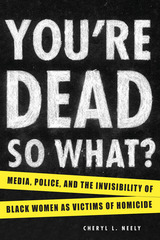 Though numerous studies have been conducted regarding perceived racial bias in newspaper reporting of violent crimes, few studies have focused on the intersections of race and gender in determining the extent and prominence of this coverage, and more specifically how the lack of attention to violence against women of color reinforces their invisibility in the social structure. This book provides an empirical study of media and law enforcement bias in reporting and investigating homicides of African American women compared with their white counterparts. The author discusses the symbiotic relationship between media coverage and the response from law enforcement to victims of color, particularly when these victims are reported missing and presumed to be in danger by their loved ones. Just as the media are effective in helping to increase police response, law enforcement officials reach out to news outlets to solicit help from the public in locating a missing person or solving a murder. However, a deeply troubling disparity in reporting the disappearance and homicides of female victims reflects racial inequality and institutionalized racism in the social structure that need to be addressed. It is this disparity this important study seeks to solve.
AUTHOR BIOGRAPHY
Cheryl L. Neely is Professor of Sociology at Oakland Community College where she teaches courses in Sociology and Criminology.
TABLE OF CONTENTS
Contents
Acknowledgments
Introduction
Prologue
Chapter 1. Black Women as Homicide Victims: Reality vs. Media Representation
Chapter 2. The Deserving vs. Undeserving Victim: Case Studies of Biased Media Reporting and Law Enforcement Intervention
Chapter 3. An Uneasy Alliance: The Symbiotic Relationship between the Media and Law Enforcement
Chapter 4. Looking at Media Bias in Three Major City Newspapers: Results of Author’s Research
Chapter 5. Making the Invisible Visible: Minorities’ Efforts to Obtain Recognition for Forgotten Victims
Conclusion
Notes
Index
REQUEST ACCESSIBLE FILE