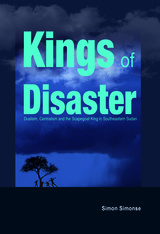 BUY FROM
Kings of Disaster: Dualism, Centralism and the Scapegoat King in Southeastern Sudan
by Simon Simonse
Michigan State University Press, 2018
eISBN: 978-1-62895-333-6
The long-awaited, revised, and illustrated edition of Simon Simonse’s study of the Rainmakers of the Nilotic Sudan marks a breakthrough in anthropological thinking on African political systems. Taking his inspiration from René Girard’s theory of consensual scapegoating, the author shows that the longstanding distinction of states and stateless societies as two fundamentally different political types does not hold. Centralized and segmentary systems only differ in the relative emphasis put on the victimary role of the king as compared with that of enemy. Kings of Disaster proposes an elegant and powerful solution to the vexed problem of regicide.
AUTHOR BIOGRAPHY
Trained as a structural anthropologist in Leiden and Paris, SIMON SIMONSE received a doctorate for his research on early kingship in South Sudan in 1990 from the Free University of Amsterdam. During the 1970s and 1980s he taught anthropology in DR Congo, Uganda, the Netherlands, South Sudan, and Indonesia. Since 1993 he has worked as a conflict transformation expert in the Horn and Great Lakes of Africa.
TABLE OF CONTENTS
Contents
Models, Diagrams and Tables
Narratives from Various Sources Serving as Case Histories
Foreword by Mark Anspach
Acknowledgments to the First Edition
Introduction
Part I: The Problem and the Setting
1. The King: Focus of Suspense, Lever of Consensus and Inventor of the State
2. Ethnological Connections Between the Nile and the Kidepo
3. Modes of Subsistence and Social Organisation
4. The Passing of the Glamour: The Bari
5. The Twin Kingdoms: The Lotuho
6. The Bugbear of the Administration: The Pari, Lokoya, and Lulubo
Part II: Dualism: Generating Consensus from the Suspense of War
7. The Dualist Structure of Territorial Organisation
8. The Dualist Structure of Age‑class Organisation
Part III: Centralism: The King as Aggressor of the People
9. The King as Enemy of his People
10. The King as Unifier of the People
11. Tipping the Balance of Power from the People to the King
12. Boundaries in the Sky: The Territorial Dimension of Kingship
13. The Fingers of God: The Cosmological Dimension of Kingship
14. Rain Queens and Rainstones: Symbols of the Centre
15. The Spear and the Bead: The Fragility of Kingship
Part IV: The Scapegoat King: The People as Aggressor of their King
16. The King as Victim in Suspense
17. The King as Victim
18. “Catching Life in the Spell of Death”: The Ritualisation of the King’s Victimhood
19. The Metabolism of Violence and Order: The King’s Stomach at Work
Conclusion
Appendix I: Chronology of Key Events
Appendix II: Linguistic affinity between the ethnic groups figuring in the text
Archival Sources
Published Titles and Theses
Map of the Peoples of South Sudan
Map of East Bank Equatoria
Name Index of the Kings, Queens, Masters and Other Overlords Figuring in the Dramas of this Study
General Index
REQUEST ACCESSIBLE FILE