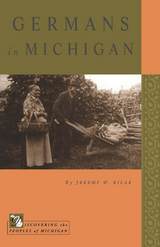 Germans are the largest ancestral group in Michigan, representing over 2.6 million descendants or 22% of the state’s population. Yet, unlike other immigrant groups, Germans have not retained their linguistic and cultural traditions as part of a distinct ethnic identity. The Bavarian villages of Frankenmuth and Gaylord stand as testaments to the once proud and vigorous German communities that dotted both rural and urban Michigan landscapes. Jeremy W. Kilar explores the social forces that transformed Germans from inward-looking immigrants to citizens in the cultural mainstream. Germans in Michigan is a story of assimilation and renewal and as such reveals the complexities of Americanization and immigration as social forces.