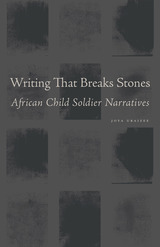 Writing That Breaks Stones: African Child Soldier Narratives is a critical examination of six memoirs and six novels written by and about young adults from Africa who were once child soldiers. It analyzes not only how such narratives document the human rights violations experienced by these former child soldiers but also how they connect and disconnect from their readers in the global public sphere. It draws on existing literary scholarship about novels and memoirs as well as on the fieldwork conducted by social scientists about African children in combat situations. Writing That Breaks Stones groups the twelve narratives into categories and analyzes each segment, comparing individually written memoirs with those written collaboratively, and novels whose narratives are fragmented with those that depict surreal landscapes of misery. It concludes that the memoirs focus on a lone individual’s struggles in a hostile environment, and use repetition, logical contradictions, narrative breaks, and reversals of binaries in order to tell their stories. By contrast, the novels use narrative ambiguity, circularity, fragmentation, and notions of dystopia in ways that call attention to the child soldiers’ communities and environments. All twelve narratives depict the child soldier’s agency and culpability somewhat ambiguously, effectively reflecting the ethical dilemmas of African children in combat.
AUTHOR BIOGRAPHY
JOYA URAIZEE is Associate Professor and Associate Chair in the Department of English at Saint Louis University in Missouri. She is the author of This Is No Place for a Woman: Nadine Gordimer, Nayantara Sahgal, Buchi Emecheta and the Politics of Gender and In the Jaws of the Leviathan: Genocide Fiction and Film.
TABLE OF CONTENTS
Contents
Preface
Acknowledgments
Chapter 1. War Narratives and African Children
Chapter 2. False Combat and Adolescent Life Writing
Chapter 3. Combat as Backdrop in Young Adult Life Writing
Chapter 4. Narrative Uncertainty in Child Soldier Fiction
Chapter 5. Fictional Dystopias in Child Soldier Narratives
Notes
Bibliography
Index
REQUEST ACCESSIBLE FILE