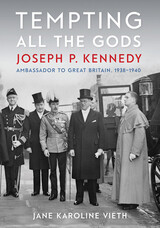 Tempting All the Gods is a detailed study of Joseph P. Kennedy’s diplomatic career in London. It examines Kennedy’s role as ambassador to the Court of St. James’s from 1938–1940, a crucial time in world history. It describes his attitudes toward American foreign policy before the outbreak of war and after the war began, explains why he held those views, and assesses their impact on Anglo-American relations. It also looks at the diplomatic background against which he worked, at the political philosophies and personalities of the statesmen with whom he dealt, and at his relations with them, particularly President Franklin Roosevelt and British Prime Ministers Neville Chamberlain and Winston Churchill. Here the reader will find a meticulously researched account of Kennedy’s career based on the latest evidence available, providing a current and balanced historical reassessment. Scholars will be able to study Kennedy’s diplomatic career within the broader context of international relations and also to gain a fuller understanding of his view of his own motives and policies, including an understanding of why the ambassadorship was the greatest achievement—with the poorest outcome—in the varied life of an intensely ambitious man who was dedicated foremost to family, friends, and fortune. This book will prove significant to students of Anglo-American relations and of World War II, and to the general public, with its enduring fascination with the Kennedy family.
AUTHOR BIOGRAPHY
Jane Karoline Vieth is professor emerita of history at Michigan State University, where she taught courses in British history and World War II.