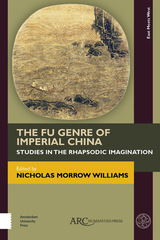 BUY
The Fu Genre of Imperial China: Studies in the Rhapsodic Imagination
edited by Nicholas Morrow Williams
Arc Humanities Press, 2019
eISBN: 978-1-64189-333-6
Cloth: 978-1-64189-331-2
This is the first book in English to examine the fu, one of China’s oldest and culturally central literary forms, from its origins up to the late imperial era. Fu poems are highly revealing sources for understanding the culture, society, and politics of their periods, and in this volume eleven essays by prominent scholars treat the fu from four major perspectives: its original use in court recitation; as a poetic genre with distinctive formal features; as a vehicle of philosophical inquiry; and as a major mode of political expression.
TABLE OF CONTENTS


<div>Introduction</div><div>Recitation and Display </div><div>1. The Origins of the Term Fu as a Literary Genre of Recitation, by Su Jui-lung</div><div>2. Into the New Realm of Belles-lettres: Intersections of Sevens and Song Verses in Jian’an Poetry, by Hsiang-lin Shih</div><div>Lyricism and Form</div><div>3. The Assimilation and Dissimilation of Fu and Shi Poetry up to the Tang Dynasty, by Cheng Zhangcan</div><div>4. Xu Wei’s Early Modern Rhapsodies: Catalogue and Critique, Lyricism and Logic, by Casey Schoenberger</div><div>Philosophy and Dialogue</div><div>5. The Metaphysical Rhapsody of the Six Dynasties, by Nicholas Morrow Williams</div><div>6. Argumentation and Generic Change in the Mid-Tang Fu: Li Guan’s (766–794) “Fu on Suffering the Pitiless Rains” and the Role of the Shelun Genre, by Robert Neather</div><div>Critique and Protest</div><div>7. The Hidden Message of Zhang Heng’s “Contemplating the Mystery”, by Y. Edmund Lien</div><div>8. A New Discourse of “Lament for the South” in the Fu of the Ming–Qing Transition, by Cheng Yu-yu</div><div>Bibliography</div>