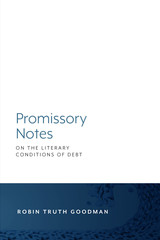 BUY
Promissory Notes: On the Literary Conditions of Debt
by Robin Truth Goodman
Lever Press, 2018
eISBN: 978-1-64315-002-4
Paper: 978-1-64315-000-0
There is no doubt that the beginning of the twenty-first century was marked by crises of debt. Less well known is that literature played a historical role in defining and teaching debt to the public. Promissory Notes: On the Literary Conditions of Debt addresses how neoliberal finance has depended upon a historical linking of geopolitical inequality and financial representation that positions the so-called “Third World” as negative value, or debt. Starting with an analysis of Anthony Trollope’s novel, The Eustace Diamonds, Goodman shows how colonized spaces came to inhabit this negative value. Promissory Notes argues that the twentieth-century continues to apply literary innovations in character, subjectivity, temporal and spatial representation to construct debt as the negative creation of value not only in reference to objects, but also houses, credit cards, students, and, in particular, “Third World” geographies, often leading to crisis. Yet, late twentieth century and early twenty-first literary texts, such as Soyinka’s The Road and Ngugi’s Wizard of the Crow, address the negative space of the indebted world also as a critique of the financial take-over of the postcolonial developmental state. Looking to situations like the Puerto Rican debt crisis, Goodman demonstrates how financial discourse is articulated through social inequalities and how literature can both expose and contest the imposition of a morality of debt as a mode of anti-democratic control.
AUTHOR BIOGRAPHY
Robin Truth Goodman is professor of literature at Florida State University, where she has served concurrently as director of the Literature Program. A scholar at the intersection of feminist theory and the critique of neoliberal institutions and structures, she is the author of Gender for the Warfare State: Literature of Women in Combat (2017); Gender Work: Feminism After Liberalism (2013); Feminist Theory in Pursuit of the Public: Women and the “Re-privatization of Labor (2010); Policing Narratives and the State of Terror (2009); and Strange Love, Or How We Learn To Stop Worrying and Trust the Market (2002).
TABLE OF CONTENTS
Contents
Introduction
1. Futures and Fictions
2. Debt’s Geographies
Notes
Works Cited
REQUEST ACCESSIBLE FILE