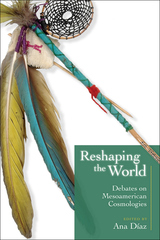 Reshaping the World is a nuanced exploration of the plurality, complexity, and adaptability of Precolumbian and colonial-era Mesoamerican cosmological models and the ways in which anthropologists and historians have used colonial and indigenous texts to understand these models in the past. Since the early twentieth century, it has been popularly accepted that the Precolumbian Mesoamerican cosmological model comprised nine fixed layers of underworld and thirteen fixed layers of heavens. This layered model, which bears a close structural resemblance to a number of Eurasian cosmological models, derived in large part from scholars’ reliance on colonial texts, such as the post–Spanish Conquest Codex Vaticanus A and Florentine Codex.

By reanalyzing and recontextualizing both indigenous and colonial texts and imagery in nine case studies examining Maya, Zapotec, Nahua, and Huichol cultures, the contributors discuss and challenge the commonly accepted notion that the cosmos was a static structure of superimposed levels unrelated to and unaffected by historical events and human actions. Instead, Mesoamerican cosmology consisted of a multitude of cosmographic repertoires that operated simultaneously as a result of historical circumstances and regional variations. These spaces were, and are, dynamic elements shaped, defined, and redefined throughout the course of human history. Indigenous cosmographies could be subdivided and organized in complex and diverse arrangements—as components in a dynamic interplay, which cannot be adequately understood if the cosmological discourse is reduced to a superposition of nine and thirteen levels.

Unlike previous studies, which focus on the reconstruction of a pan-Mesoamerican cosmological model, Reshaping the World shows how the movement of people, ideas, and objects in New Spain and neighboring regions produced a deep reconfiguration of Prehispanic cosmological and social structures, enriching them with new conceptions of space and time. The volume exposes the reciprocal influences of Mesoamerican and European theologies during the colonial era, offering expansive new ways of understanding Mesoamerican models of the cosmos.

TABLE OF CONTENTS
Contents
List of figures
Preface
Acknowledgments
Introduction: Rethinking the Mesoamerican Cosmos by Ana Díaz
Part I. Recognition: On Describing Others’ Worlds
Chapter 1. Colliding Universes: A Reconsideration of the Structure of the Precolumbian Mesoamerican Cosmos by Jesper Nielsen and Toke Sellner Reunert
Chapter 2. Incorporating Mesoamerican Cosmology within a Global History of Religion: Some Considerations on the Work of Lorenzo Pignoria by Sergio Botta
Chapter 3. Dissecting the Sky: Discursive Translations in Mexican Colonial Cosmographies by Ana Díaz
Part II. Inventiveness: Reshaping Experience in Colonial Cosmologies
Chapter 4. The Colonial Encounter: Transformations of Indigenous Yucatec Conceptions of K’uh by Gabrielle Vail
Chapter 5. Zapotec Travels in Time and Space: The Correlation between the 260-Day Cycle and a Multilevel Cosmological Model by David Tavárez
Chapter 6. A Cosmology of Water: The Universe According to the Ch’orti’ Maya by Kerry Hull
Part III. Complexity: Breaking Paradigms on Cosmological Conceptions
Chapter 7. Distance and Power in Classic Maya Texts by Alexandre Tokovinine
Chapter 8. The Sky, the Night, and the Number Nine: Considerations of the Nahua Vision of the Universe by Katarzyna Mikulska
Chapter 9. Creating and Destroying the Upper Part of the Cosmos: A New Approach to the Study of Wixarika Cosmology by Johannes Neurath
About the Authors
Index
REQUEST ACCESSIBLE FILE