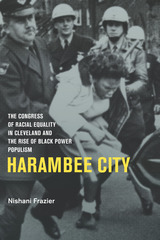 It was a phrase that consumed the American imagination in the 1960s and 70s and inspired a new agenda for black freedom. Dynamic and transformational, the black power movement embodied more than media stereotypes of gun-toting, dashiki-wearing black radicals; the movement opened new paths to equality through political and economic empowerment.

In Harambee City, Nishani Frazier chronicles the rise and fall of black power within the Congress of Racial Equality (CORE) by exploring the powerful influence of the Cleveland CORE chapter. Frazier explores the ways that black Clevelanders began to espouse black power ideals including black institution building, self-help, and self-defense. These ideals challenged CORE’s philosophy of interracial brotherhood and nonviolent direct action, spawning ideological ambiguities in the Cleveland chapter. Later, as Cleveland CORE members rose to national prominence in the organization, they advocated an open embrace of black power and encouraged national CORE to develop a notion of black community uplift that emphasized economic populism over political engagement. Not surprisingly, these new empowerment strategies found acceptance in Cleveland.

By providing an understanding of the tensions between black power and the mainstream civil rights movement as they manifested themselves as  both local and national forces, Harambee City sheds new light on how CORE became one of the most dynamic civil rights organizations in the black power era.

AUTHOR BIOGRAPHY
Nishani Frazier is associate professor of History at Miami University. She is the coeditor, with Manning Marable and John McMillan, of Freedom on My Mind: The Columbia Documentary History of the African American Experience.
TABLE OF CONTENTS
Contents
Preface: The Wiz behind the Curtain
Acknowledgments
Introduction: Things like That Happen in History
I.
1. How CORE Began
2. Negroes Will Not Be Pacifists
3. An Eager Band
4. Lonely Are the Brave
II.
5. New Directions to Black Power
6. Breaking the Noose
7. Harambee City
8. A Nation under Our Feet
9. Until . . .
Notes
Index
REQUEST ACCESSIBLE FILE