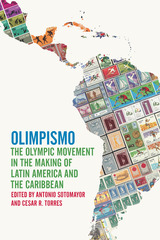 The Olympic Games are a phenomenon of unparalleled global proportions. This book examines the rich and complex involvement of Latin America and the Caribbean peoples with the Olympic Movement, serving as an effective medium to explore the making of this region. The nine essays here investigate the influence, struggles, and contributions of Latin American and Caribbean societies to the Olympic Movement. By delving into nationalist political movements, post-revolutionary diplomacy, decolonization struggles, gender and disability discourses, and more, they define how the nations of this region have shaped and been shaped by the Olympic Movement.
AUTHOR BIOGRAPHY
Antonio Sotomayor is Associate Professor and Librarian of Latin American and Caribbean Studies at the University of Illinois at Urbana-Champaign. He is the author The Sovereign Colony: Olympic Sport, National Identity, and International Politics in Puerto Rico, winner of the José Toribio Medina book award.

Cesar R. Torres is Professor in the Department of Kinesiology, Sport Studies, and Physical Education at The College at Brockport, State University of New York. He is a former president of the International Association for the Philosophy of Sport, the founding president of the Asociación Latina de Filosofía del Deporte, and a fellow in the National Academy of Kinesiology.
REVIEWS
“This original and important collection of essays offers an additional lens to the analysis of Latin America and the Caribbean and sheds new light on the intersection of sports, politics, nation building, and identity formation.”
—Raanan Rein, Professor of Latin American and Spanish History, Tel Aviv University


"The publication is a landmark for Olympic Movement studies in Latin America and the Caribbean. The book is interesting, easy to read, and highly informative."
—Marcia De Franceschi Neto-Wacker, The Journal of Olympic History, Volume 28, Number 2 (2020)


“It is not unusual for historians and social scientists to present the history of Latin America and the Caribbean as a footnote in world history. A common procedure is first to examine the history of the United States and Europe and then look back to Latin America to explain many of the sociocultural and political phenomena of the region. More often, the agency of Latin America in the making of international order is simply neglected. In the past years, however, growing numbers of scholars are trying to change this approach by examining Latin American history through its own lenses. The book Olimpismo, edited by Cesar Torres and Antonio Sotomayor, follows the emergence and consolidation of this movement. In this sense, the book is a great contribution not only to the history of sports literature but also to understanding the role of Latin America in the making of twentieth-century history.”
—Luiz Guilherme Burlamaqui, Journal of Sport History, Volume 48, Number 1, Spring 2021


Sport Policy, the YMCA, and the Early History of Olympism in Uruguay - Shunsuke Matsuo