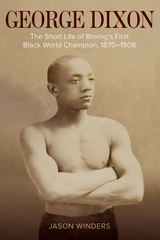 On September 6, 1892, a diminutive Black prizefighter brutally dispatched an overmatched white hope in the New Orleans Carnival of Champions boxing tournament. That victory sparked celebrations across Black communities nationwide but fostered unease among sporting fans and officials, delaying public acceptance of mixed-race fighting for half a century. This turn echoed the nation’s disintegrating relations between whites and Blacks and foreshadowed America’s embrace of racial segregation.

In this work of sporting and social history we have a biography of Canadian-born, Boston-raised boxer George Dixon (1870–1908), the first Black world champion of any sport and the first Black world boxing champion in any division. George Dixon: The Short Life of Boxing’s First Black World Champion, 1870–1908 chronicles the life of the most consequential Black athlete of the nineteenth century and details for the first time his Carnival appearance, perhaps the most significant bout involving a Black fighter until Jack Johnson began his reign in 1908. Yet despite his triumphs, Dixon has been lost to history, overshadowed by Black athletes whose activism against white supremacy far exceeded his own.

George Dixon reveals the story of a man trapped between the white world he served and the Black world that worshipped him. By ceding control to a manipulative white promoter, Dixon was steered through the white power structure of Gilded Age prizefighting, becoming world famous and one of North America’s richest Black men. Unable to hold on to his wealth, however, and battered by his vices, a depleted Dixon was abandoned by his white supporters just as the rising tide of Jim Crow limited both his prospects and the freedom of Blacks nationwide.

Jason Winders is a journalist and sport historian who lives in London, Ontario.