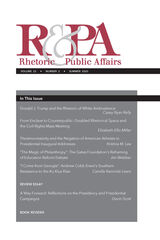 Judi Atkins and John Gaffney, Voices of the UK Left: Rhetoric, Ideology and the Performance of Politics, reviewed by Elizabeth R. Earle