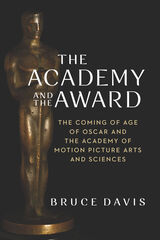 The first behind-the-scenes history of the organization behind the Academy Awards.

For all the near-fanatic attention brought each year to the Academy Awards, the organization that dispenses those awards—the Academy of Motion Picture Arts and Sciences—has yet to be understood. To date, no one has ever produced a thorough account of the Academy’s birth and its awkward adolescence, and the few reports on those periods from outside have always had a glancing, cursory quality. Yet the story of the Academy’s creation and development is a critical piece of Hollywood’s history.

Now that story is finally being told. Bruce Davis, executive director of the Academy for over twenty years, was given unprecedented access to its archives, and the result is a revealing and compelling story of the men and women, famous and infamous, who shaped one of the best-known organizations in the world. Davis writes about the Academy with as intimate a view of its workings, its awards, and its world-famous membership. Thorough and long overdue, The Academy and the Award fills a crucial gap in Hollywood history.
AUTHOR BIOGRAPHY
Bruce Davis joined the Academy staff in 1981, after serving as Theater Department chair at Juniata College. He was the organization's Executive Director for twenty years, overseeing the establishment of one of the world's great film archives and finding handsome new quarters for the Academy's Herrick Library. Davis has described his tenure as "thirty years among the masters of an art form." He lives in Los Angeles.
TABLE OF CONTENTS