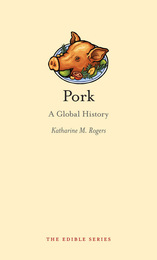 “Pork. The Other White Meat.” The well known National Pork Board slogan doesn’t begin to describe the many types of meat that fall under the umbrella of “pork.” The most versatile of meats, pork ranges from the rich, delicate succulence of a roast loin to the dry, salty assertiveness of pancetta and bacon. Since the Roman Empire, it has also been the most widely eaten meat—it formed the high point of Roman feasts and was the mainstay of the traditional working class diet in Europe and North America.

Pork: A Global History follows the transition of pork from fashionable food to popular fare while also exploring the many edible parts of a pig and ways they are prepared. Katharine Rogers depicts how pork stopped being featured at aristocratic banquets and in high-end cookbooks as it became associated with the lower and middle classes. She explains how European settlers brought pork to the Americas and that barrel pork, kept submerged in a barrel of brine, was a staple of working class people in the United States. While roast suckling pig remains the most luxurious form of pork, Rogers reveals that people also use pig’s blood to make black puddings, its tail to flavor soups and stews, and its fat for frying and as a pastry shortening. Beautifully illustrated and filled with recipes from around the world, Pork will be a necessary addition to the bookshelf of any lover of bacon, sausage, and pork chops.
AUTHOR BIOGRAPHY
Katharine M. Rogers is a freelance writer living in Bethesda, Maryland, and the author of Cat in Reaktion’s Animal series.
TABLE OF CONTENTS


1. The Ideal Meat Producer
2. Prejudices Against the Pig
3. Pork in Europe
4. Pork in the New World
5. Pork in the Far East
6. Today's Mass-produced Pork