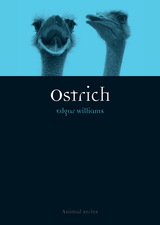 Ostriches may not be able to fly, but they loom large in the bird kingdom. They are the world’s tallest and heaviest living birds, and they lay the largest eggs. With their long legs, ostriches are also fleet of foot, running up to 43 miles per hour, and formidable fighters—an ostrich kick can kill. But since the beginning of history, these extraordinary and outlandish birds have also been exploited by humans for their eggs, meat, skin, and feathers. In Ostrich, Edgar Williams provides a singular, comprehensive insight into the natural history, behavior, and habitat of this monumental bird.

Williams describes how the demand for ostrich feathers was so great during the Victorian era that vast fortunes were made from ostrich farming, particularly in South Africa and the United States. After fashions changed following World War I, farmers lost their fortunes, but the now domesticated ostrich found a new purpose—today, ostrich farmers produce plumes and leather for luxury markets, as well as meat for grocery stores. In addition to telling its, Williams reveals how the ostrich has been featured in culture, from its representations in cave paintings, medieval manuscripts, and the Bayeux tapestry to its use in advertising and cartoons. Featuring many striking illustrations, Ostrich will interest nature lovers, artists, and fashionistas alike.
AUTHOR BIOGRAPHY
Edgar Williams is a reader in physiology at the University of Glamorgan, Wales, and the author of Giraffe, also in Reaktion’s Animal series.
TABLE OF CONTENTS