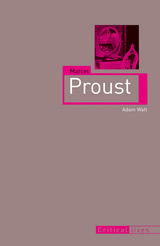 Marcel Proust (1871–1922) spent fourteen years creating In Search of Lost Time, his seven-volume magnum opus. He died when it was only half in print, unable to see it become one of the most important literary works of the twentieth century. Over eighty years later, the work still garners extraordinary levels of critical attention, and Proust’s habits, health, and sexual preferences still keep commentators and fans occupied. In this concise biography, Adam Watt explores the life of a writer whose every experience was stored, dissected, and redeployed within a vast fictional work.

After considering Proust’s earlier years of personal and aesthetic experiment, Watt provides an engaging account of two intertwined processes taking place against the vibrant backdrop of Belle Époque Paris and World War I: the progress of In Search of Lost Time and the simultaneous decline of its author. He demonstrates how Proust’s own periods of ill health and isolation reflected his narrator’s thoughts on desire, love, and loss, as well as his contemplation of beauty, memory, aging, and the possibility of happiness. Drawing on the author’s immense correspondence, the accounts of his contemporaries, and the insights of recent scholarship, Marcel Proust offers a rewarding new portrait of the novelist once described as “the most complicated man in Paris.”
AUTHOR BIOGRAPHY
Adam Watt is associate professor of French at the University of Exeter and a member of the Equipe Proust at the ITEM/ENS, Paris, France. He is the author of Reading in Proust’s A la recherche and The Cambridge Introduction to Marcel Proust.
REVIEWS
“Here is an excellent brief life of Proust. . . . Watt is succinct without being perfunctory, scholarly without pedantry, authoritative without being exhaustive. . . . A readable and reliable account of one of the 20th-century’s most telling writers.”
— The Age

“This is an amazing book. . . . It covers everything, but its economy provides a perspective that lets us see both the forest and the trees. . . . . One may be amazed that this story can pull one in yet again, but in Watt’s expert hands it does.”
— Gay and Lesbian Review

“Excellent. . . . Apart from a sense that Watt has deftly and with considerable economy tackled all aspects critical to the production of Proust’s novel, a particular pleasure to be had is his neat turn of phrase.”
— Times Literary Supplement