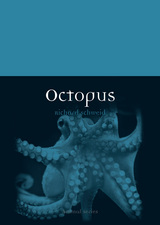 BUY FROM
Octopus
by Richard Schweid
Reaktion Books, 2013
eISBN: 978-1-78023-215-7
Paper: 978-1-78023-177-8
Our relationship to the octopus dates back to prehistory, when the eight-armed animal was depicted on vases and found in stone carvings from ancient Greece. Now we appreciate them for their abilities as escape artists, with sophisticated camouflage systems and ink jets—as well as their roles in tasty dishes from many cuisines. Octopuses are also among the most intelligent invertebrates in the world, with mental capacity comparable to that of a dog. In this heavily illustrated book, Richard Schweid details this animal’s remarkable natural history and its multifaceted relationship with humans.

Schweid describes the octopus’s intelligence, defense mechanisms, and short lifespan. He shows how some people have considered octopuses as nothing more than a meal and examines their role in the modern global fish and seafood industry. Other cultures, he reveals, see them as erotic totems or symbols of the darkest evils, and he discusses the difficulties people face when trying to keep them as pets—they are able to use their problem-solving skills, mobility, and boneless body to escape seemingly secure tanks. A fascinating glimpse into the extraordinary world of these popular creatures, Octopus will immerse readers in its amazing undersea world.
AUTHOR BIOGRAPHY
Richard Schweid is an author and journalist living in Barcelona. He has published eight books, including Eel in the Animal series for Reaktion Books.
REVIEWS
“Schweid delivers the abundance of information in Octopus in a clear and concise style, and his text is accompanied by dozens of color illustrations, including beautiful photographs of the animals and an array of images from art and folklore. The book is an enjoyable and compact guide to one of nature’s more peculiar creations.”
— Chapter 16