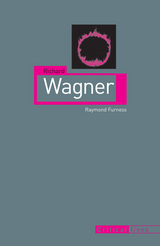 BUY FROM
Richard Wagner
by Raymond Furness
Reaktion Books, 2013
Paper: 978-1-78023-182-2
eISBN: 978-1-78023-223-2
With their complex textures, rich harmonies, and elaborate use of leitmotifs, the operas of German composer Richard Wagner (1813–83) remain some of the most influential—and contentious—in the history of the genre. But while he won renown with what he achieved on the stage, his life was marked by political exile, turbulent love affairs, and poverty. And because Wagner and his music are exceedingly intertwined with the great upheavals of his time, it is difficult to produce an impartial assessment of his output. Appearing at the bicentennial of his birth, Richard Wagner provides a clear and balanced view of both Wagner’s great successes and the controversies generated by his life and art.

Using Wagner’s wide-ranging engagement with mythology as a starting point, Raymond Furness explores the composer’s music and prose writings. He delves deeply into Wagner’s essential operas, such as The Ring and Tristan and Isolde, offering fascinating insight into these works. Because the great operatic pieces often overshadow the rest of Wagner’s compositions, Furness also considers neglected fragments like “Wieland the Smith,” “The Mines at Falun,” and “The Visitors,” producing a more rounded critical picture of the composer. With up-to-date dissections of recent Bayreuth productions and a refreshingly uncluttered approach to a much-misunderstood life, Richard Wagner is an engaging look at one of music’s most beguiling figures.
AUTHOR BIOGRAPHY
Raymond Furness is former chair of German at the University of St Andrews, Scotland, and the author or coeditor of many books on German literature and culture.
REVIEWS
“[Furness’s] compact book, with handsome black-and-white illustrations, offers a pithy overview of Wagner’s works and life and a recommended discography.”
— Operavore

“This lucidly written, balanced, and non-hysterical book rises to the top. It is an excellent guide to the understanding of Wagner’s continued relevance to the contemporary world.”
— Hans Rudolf Vaget, Wagner Notes