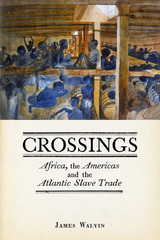 Crossings: Africa, the Americas and the Atlantic Slave Trade
by James Walvin
Reaktion Books, 2013
eISBN: 978-1-78023-204-1
Cloth: 978-1-78023-194-5
We all know the story of the slave trade—the infamous Middle Passage, the horrifying conditions on slave ships, the millions that died on the journey, and the auctions that awaited the slaves upon their arrival in the Americas. But much of the writing on the subject has focused on the European traders and the arrival of slaves in North America. In Crossings, eminent historian James Walvin covers these established territories while also traveling back to the story’s origins in Africa and south to Brazil, an often forgotten part of the triangular trade, in an effort to explore the broad sweep of slavery across the Atlantic.

Reconstructing the transatlantic slave trade from an extensive archive of new research, Walvin seeks to understand and describe how the trade began in Africa, the terrible ordeals experienced there by people sold into slavery, and the scars that remain on the continent today. Journeying across the ocean, he shows how Brazilian slavery was central to the development of the slave trade itself, as that country tested techniques and methods for trading and slavery that were successfully exported to the Caribbean and the rest of the Americas in the following centuries. Walvin also reveals the answers to vital questions that have never before been addressed, such as how a system that the Western world came to despise endured so long and how the British—who were fundamental in developing and perfecting the slave trade—became the most prominent proponents of its eradication.

The most authoritative history of the entire slave trade to date, Crossings offers a new understanding of one of the most important, and tragic, episodes in world history.
AUTHOR BIOGRAPHY
James Walvin is a fellow of the Royal Society of Literature, professor emeritus at the University of York, and a visiting fellow at Yale University. He is the author of many books, most recently The Slave Trade, and lives in York, UK.
REVIEWS

“The incomparable James Walvin has done it again: he has crafted a beautifully written and deeply informed single volume history of the Atlantic slave trade and its consequences on three continents. This book is full of fresh ideas and astounding detail; it is at once great storytelling, punctuated with real people and voices, and an unblinking analysis of numerous great questions and paradoxes about the power of slavery in creating the Atlantic world over four centuries.”

“Playing to his strengths as an engaging, enthusiastic, and well-informed historian of slavery, Walvin extends his prolific output in a book that offers a sweeping overview of transatlantic slavery and a reflective commentary on its continuing significance. The range and extent of scholarly publication on slavery in the Atlantic world and the pace with which that research is disseminated raise the need for an account, such as Crossings, that draws selectively on the secondary literature to provide an up-do-date synthesis of the findings of recent historians on plantation slavery.”
— Journal of American History

2  Slave Trading on the Coast

8  Chasing the Slave Ships: Abolition and After

9  The Durable Institution: Slavery after Abolition

10  Then and Now: Slavery in the Modern World