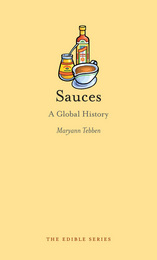 BUY FROM
Sauces: A Global History
by Maryann Tebben
Reaktion Books, 2014
Cloth: 978-1-78023-351-2
eISBN: 978-1-78023-413-7
Where would eggs benedict be without hollandaise, spaghetti without Bolognese, tortilla chips without salsa, or French fries without ketchup? A world without sauces is a dull and dry world indeed. But what exactly are sauces? How did they become a crucial element in every country’s cuisine? Maryann Tebben answers these questions in this flavorful history, giving sauces their due as a highly debatable but essential part of our culinary habits.

Tebben begins in fifth-century China with its many fermented sauces, then follows them along trade routes from East to West as they become a commodity and helped seafarers add flavor to their rations. Tracing the evolution of food technology, she explores the development of the art of sauce creation and examines the foams, ices, and smokes—barely recognizable as sauces—that are found in the increasingly popular world of molecular gastronomy. Tebben also investigates the many controversies that have sprung up around sauces—how salsa has overtaken ketchup in popularity in the United States, and how British Worcestershire sauce actually originated in India—and offers tantalizing historical comparisons such as that between ketchup and Tabasco. A charming look at the source of soy sauce, mole, beurre blanc, and more, Sauces will please expert chefs and novice sauciers alike.
AUTHOR BIOGRAPHY
Maryann Tebben is associate professor of French and director of the Center for Food Studies at Bard College at Simon’s Rock in Massachusetts.
TABLE OF CONTENTS

1. The Origin and Conception of Sauce